There's a common perception that people in the 18th century didn't live as long as they do today. It's true that the average life expectancy wasn't nearly as long, but some individuals became centenarians, dodging hazard and illness to far exceed the typical life span not only of their own era but also of the present one. One of these men was Henry Church.

Church was a native of England, born on 30 November 1750. He did not set foot in America until he was almost thirty years old, as a private soldier in the 63rd Regiment of Foot. That regiment had been in America since the middle of 1775; Church was a recruit who arrived in October 1780; family tradition suggests that he had prior experience as a soldier, and the fact that he was assigned directly to the regiment's light infantry company supports this theory (at least a year of experience was usually required before being sent to the light infantry or grenadiers).

However long his career as a soldier was, it came to a quick end in America. The light company of the 63rd was sent to Virginia in early 1781, and Henry Church was taken prisoner in the vicinity of Petersburg. He was sent to Lancaster, Pennsylvania, where many other British prisoners were held, and remained there until a peace treaty was signed in 1783.

The end of the conflict brought about the repatriation of prisoners of war, but some chose not to return home. British prisoners who did not return were written off as deserters, among them Henry Church. He married a Philadelphia Quaker named Hannah Keine, three years younger than him, and the couple moved west to frontier lands. They settled in present-day West Virginia very near the southwestern corner of Pennsylvania where they built the homestead in which they spent the rest of their lives, raising eight children.

They lived on. Things changed. It is difficult to imagine such a temporal connection, but Henry and Hannah Church watched from his home as a railroad line was built nearby. The line, belonging to the Baltimore & Ohio Railroad, was not an early experimental venture; it was 1852 when regular service on it began. Henry Church was 101, and his wife 98. They lived on, and saw many trains pass. Henry Church came to be known in the region as "Old Hundred" in recognition of his age.

In 1858 railroad officials offered to give them a train ride to Wheeling, the nearest large town, where they would be treated with some celebrity. The story is that Henry declined the offer with the simple response, “I never did make a show of myself and I never will.” In spite of his modesty, conductors would point out the aged couple to passengers when trains passed. And many more passed. 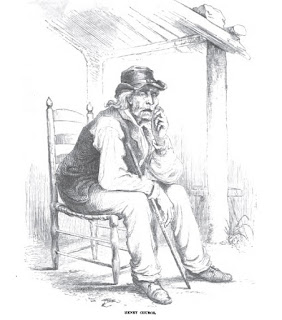 Hannah Church died on 27 July 1860, having lived for 106 years. Henry Church survived her by only 49 days, passing on 14 September. Their legacy, however, lives on. A town grew up in the area where they lived, first called "Old Hundred" and in 1886 officially named Hundred. It remains to this day, with a population of around 300 including descendants of Henry and Hannah Church, the former British soldier and his American wife.

When hostilities broke out in America, it was critical to increase the strength of the British military presence there; this meant increasing the strength of the army overall. Recruiting efforts were intensified. Because the army was an all-volunteer force, greater incentives had to be offered than the usual enlistment bounty and the possibility of a pension after a long career. On 16 December 1775, a proclamation was issued that men who enlisted after that date would be entitled to a land grant in America if they chose it, as long as they had served at least three years when the war ended. For agricultural workers, some itinerant, this was a very tempting offer; even though the lands were in a far-away wilderness, it was the only likely way for a British laborer to own his own property.

One of the many who enlisted under these terms was William Disney. The 5' 10 1/2" tall Irishman enlisted in the 34th Regiment of Foot 1776 and proceeded with his regiment to Canada where he spent the entire war, mostly in the environs of Quebec. In 1783, when the war ended and the army was reduced in size again, he took his discharge at the age of 28. The land being offered, due to the outcome of the war, was in Canada rather than more southern colonies as had been anticipated years before; Disney opted to return to Great Britain instead of taking the land bounty (his reason for doing so, however, is not known).

Disney traveled from Quebec to Halifax with the intention of continuing on to England, but for some unknown reason was unable to continue the journey. Instead, he went to work for a landowner named George Deschamps in Windsor, some miles northwest of Halifax.

He worked hard and well. By 1786 he had saved some money and earned the respect of his employer. He decided it was time to try his had at developing his own land. In a good clear hand he wrote a petition to the local government expressing his desire to settle in the area if he could receive a land grant. His employer endorsed him, saying that he was a "well able to improve a location."

We have no information on how William Disney fared, but his story of voluntary enlistment, faithful service, diligent work and initiative is typical of the majority of British soldiers, largely overlooked because their careers were uneventful but nonetheless important.

James Hollis received a pension for his military service. This in itself is not unusual; by the 1770s the British army had a well-established pension system and soldiers with careers of 20 years or more were likely to received this reward for their faithful service. Hollis, however, took a different route.

Hollis was born in Wanworth, Surrey, a few miles up the Thames river from London, on 19 August 1757. How he spent his early life is not known, but by 1780 he had enlisted in the British army. Along with about three dozen other recruits for the 63rd Regiment of Foot, he landed in Charleston, South Carolina in January 1781. From there, he was sent inland to join his regiment in time to participate in the relief of fort Ninety Six in June, and the battle of Eutaw Springs in September.

By the end of the year he was back in Charston and stationed at an outpost on Haddrell's point, across the Cooper River from the city. From here he deserted, as did over a dozen other men of the 63rd. The muster rolls show them all as having deserted on 24 December 1781, but it's more likely that they trickled away throughout the month and were administratively written off on the same date.

A year or so of service followed by desertion in a foreign land was not the way for a British soldier to get a pension. But Hollis found another way. He received the protection of American troops under Francis Marion in a region known as the High Hills of Santee. From there he went on to Wilmington, North Carolina. He soon enlisted as a fifer in a company of North Caroina troops commanded by a Captain Rhodes, and served for about 18 months until peace was declared. Notice that he had been a private soldier in British service, and was 24 years old when he started his brief career as a fifer; it is a widely-held misconception that all drummers and fifers were boys or teenagers.

It was for his service in with the American army as a fifer that James Hollis received a pension; he applied for it in 1832 when he was 75 years old and living in Union District, South Carolina. Had he remained in the British army, he could've received a pension thirty years sooner.


Learn more about British soldiers in America!
Posted by Don N. Hagist at 11:01 AM No comments: