Reviews of Noble Volunteers: the British Soldiers Who Fought the American Revolution

The new book Noble Volunteers: the British Soldiers Who Fought the American Revolution was reviewed in the Wall Street Journal.
And the Washington Independent Review of Books.
Also Kirkus Reviews
And a video review.
Posted by Don N. Hagist at 8:49 AM 2 comments:

Noble Volunteers: the British Soldiers Who Fought the American Revolution 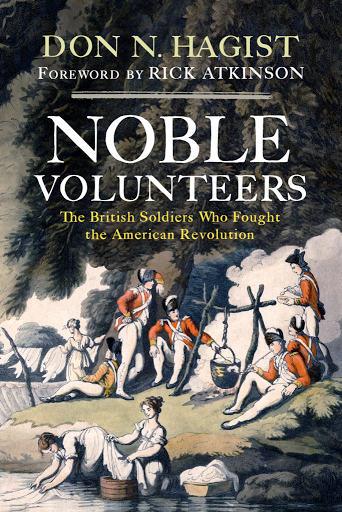 It took two years to compile and organize information collected over several decades, followed by two years of writing, revising and editing. Now the most authoritative book on British soldiers in the American Revolution is available in stores and from online retailers.

Noble Volunteers: the British Soldiers Who Fought the American Revolution tells about how soldiers were recruited and trained in times of peace and war, how they prepared for hostilities and adapted to warfare, where they lived, what they ate, what they earned, the illness, hardships and punishments that they suffered, how their careers evolved, and what became of them when the war was over. Rather than characterize the army as a mass of homogeneous men, this book emphasizes the individuals and their broad range of experiences. Read the review in the Wall Street Journal!

The book is available from major retailers, but please obtain it from your local independent bookseller, or from a historic site book shop - these organizations need your support.

For a good price, we recommend the Fort Plain Museum.

Signed, personalized copies can be ordered from Books on the Square in Providence, Rhode Island.