Conventional wisdom holds that British soldiers earn only a meager income, and deductions from their pay for food and clothing left them destitute of any disposable income. While this perspective is based on some truth, it is a highly distorted and incomplete view of the soldier's finances. The 8 pence per day guaranteed to a soldier, from which his food and clothing were purchased through deductions, was indeed a low wage even for the era, but if well-managed it was sufficient. The notion of using this money to pay for food and clothing was no different than the lot of any other profession where workers had to purchase food and clothing; the fact that this budget was managed by the army rather than by the soldier himself was a simple way to insure that the money was, in fact, spent on necessities rather than squandered.

More important, 8 pence a day was a base pay, a minimum, and soldiers enjoyed many opportunities to earn additional money. The army employed soldiers to build roads, fortifications and other infrastructure, work for which soldiers were paid additional wages. Men with skills such as tailoring, shoemaking, carpentry, gunsmithing, baking, and a host of others could work at their trades for the army, in addition to their normal duties as soldiers, and earn extra money for their efforts. Men with free time could even hold part-time jobs outside of the army, as long as those jobs didn't interfere with their military duties in any way.

Another military job available to soldiers was being a servant to an officer. A commissioned regimental officer was entitled to take one servant from among the soldiers in his regiment (the highest ranking officers could have two), provided that the soldier remained fully capable of doing duty in the ranks when necessary. The soldier-servant had a great deal of responsibility, performing not only menial chores like caring for his master's clothing and baggage, but also tasks that required great trust such as shopping and delivering messages. In return for his efforts the soldier enjoyed a measure of relative freedom, heightened responsibility, and sometimes better food and clothing provided by his master. Most important, he received additional pay, more per diem than his base wage as a soldier that already covered his basic necessities, making a lucrative position. A soldier who forged a good relationship with an officer might follow his master through his entire military career and remain in his service after being discharged, insuring a secure living for the rest of his life.

Writings of officers frequently mention servants, occasionally by name, and provide us with anecdotal glimpses into their lives. My book British Soldiers, American War includes a chapter on these men with a detailed study of one of them. Another was George Peacock of the 52nd Regiment of Foot.

Peacock joined the army at an early age, enlisting in 1763 when he was just 16 years old. The soldier from Sutton, Yorkshire spent most of his career with the 52nd Regiment of Foot, but also served for a time in the 78th Regiment. The 78th was disbanded in December 1763, raised and disbanded again during the American Revolution, and raised once more in the 1790s; we do not know whether Peacock served in it briefly at the beginning or at the end of his career.

What we do know is that Peacock was with the 52nd Regiment of Foot while that corps was in Canada in the early 1770s. The 52nd was due to return to Great Britain in 1774, but instead was sent to Boston in response to the mounting tensions there. The regiment served in Boston through March 1776, then in the campaigns around New York city in the second half of that year. By late summer of 1777 they were part of the campaign that captured the city of Philadelphia.

By this time George Peacock was a corporal, and spent some of his time attending to one of the 52nd Regiment's more colorful officers, Lt. Richard St. George Mansergh St. George. Wealthier than most officers, Lt. St. George retained personal servants in addition to a soldier. It is not clear whether Peacock was retained by St. George as a servant per se, or attended him instead as an orderly or in some other capacity. What we know about the relationship was written by a fellow officer, Lt. Martin Hunter, who concluded a long description of one of St. George's private servants with:

On a shot being fired at any of the advanced posts, master and man set off immediately, the master attended by a man of the Company named Peacock, who had been a great deal with the Indians in Canada, and a famous good soldier. I have often been surprised that they were not killed.

The impetuous St. George and "famous good soldier" Peacock almost did meet their demise in the Battle of Germantown outside of Philadelphia in early October 1777. Having secured the city, the British army encamped some distance away in a defensive line covering the most likely approach. The 2nd Battalion of Light Infantry camped in Germantown, along with other elements of the army. A complex surprise attack by an overwhelming force of Washington's army appeared out of the fog on the morning of 4 October and descended upon the British camp. The light infantry battalion formed and fought bravely, but was unable to stand against vastly superior numbers.

The story of the battle is told elsewhere. What matters for this tale is that, as Lt. Hunter wrote, "It was in the first volley that poor St. George was so badly wounded in the head... he was carried off the field by Peacock, who behaved like himself, otherwise St. George must certainly have been taken prisoner.”

Lt. St. George survived the wound and had a metal plate put in his head. Later in the war, when he was promoted to Captain in the 44th Regiment, Corporal Peacock did not follow him but remained with the 52nd Regiment. The grateful St. George asked Lt. Hunter “to take good care of Peacock, and gave him fifty guineas.”

Fifty guineas was about seven years' pay for a private soldier, at the base pay rate of 8 pence per day. As a corporal, Peacock was earning more than that, and probably had additional income from various duties over the years. He probably could have sought his discharge when the regiment returned to Great Britain in late 1778; being only 36 years old, with a nest egg, he was in a good position to go into some other enterprise. But he remained in the army for 21 more years, finally taking his discharge in 1799 at the age of 52, after having served 36 years as a soldier. He received a pension, which probably allowed him to live more comfortably than most when combined with his other earnings if he'd managed his money prudently. 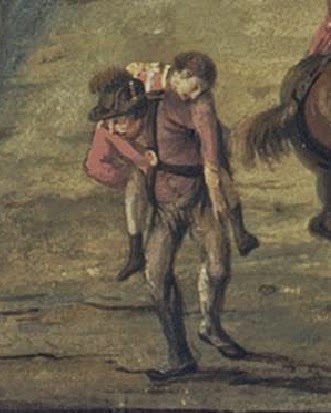 Lt. St. George immortalized Peacock in another way. An avid caricaturist, St. George sketched many scenes during his American service. A few survive, but none are know to depict Peacock. But an artist made an illustration of the Battle of Germantown that is almost certainly based on St. George's work. In the center foreground is a soldier carrying a wounded officer off the field. This is surely a representation of Corporal George Peacock dutifully carrying Lt. Richard St. George, one of the only depictions of a British common soldier to which we can attach a specific individual.