I don't post pictures on this blog because I write about common soldiers as individuals. There are many images of British soldiers dating from the era of the American Revolution, but they're "generic"; they show us typical soldiers, but not specific men. As such, it's not worth the extra effort to get the necessary permissions to use them, even though we all like pictures. For a common soldier to have been represented in a picture, there'd have to be something very special about him.

Looking at the military career of John Battin, a trooper in the 17th Light Dragoons, we don't find anything remarkable. He arrived in America in October 1776, one of many new men who expanded the 17th from a typical cavalry regiment to a legion with a contingent of foot soldiers to augment its dragoons. It's not clear whether the 24-year-old was among the mounted or dismounted men when he joined his regiment on the campaign that took him into New Jersey in the closing months of 1776. In fact, all we know about his service is what we can discern from the regiment's muster rolls, which do not distinguish between mounted and dismounted dragoons. As the war progressed, he is frequently listed on the rolls as "on duty" or "on command", nebulous terms that indicate that he did some sort of special duty. This was quite common among men of the 17th LD who were used as messagers, escorts, and all sorts of detached duties. But it could mean something as simple as that he was off cutting wood somewhere, too. The rolls give us no hints about the specific service he saw in America.

Perhaps Battin was one of the many well-educated middle-class Britons who joined the army in hopes of advancement, having the educational qualifications but not the connections or patronage to enter the army as an officer. But it's more likely that he had learned the trade of stocking-making in his native Bristol, England, and joined the army in pursuit of a more interesting life, just and many of his fellow soldiers had done.

As the war wound down, John Battin appears to have tired of his military career just as he may have tired of his pre-service trade. He deserted with two other men on 26 March 1782, one month and 24 days after his thirtieth birthday. He avoided capture and remained in New York after the British evacuated the place in November 1783.

Battin had some entrepreneurial spirit. In May 1786 he opened a porter house and tavern "at the sign of the Blue Bell" in Sloat Lane, present-day Beaver Street. The following year he advertised that "he draws the best Porter at Nine-Pence per Quart, and makes no doubt but the excellence of his Porter (and having the advantage of a cool Cellar) will insure him the continuance of the customer of those who may honour him with their Company."

By the summer of 1788 he had moved up town a ways, to John Street. In late July or early August John Battin married "the agreeable Miss Margaret Amelia Frauncis, daughter to Mr. Samuel Frauncis, of said street." She was seventeen years younger than him. The following year he was offering pickled oysters for sale from 27 John Street, and in 1790 was advertising that "Parties of gentlemen can be accommodated with dinners and suppers in the genteelest manner, and at the shortest notice" in addition to preparing "Oysters and Lobsters for exportation, in pots and kegs."

His business apparently prospered; in 1796 he purchased a large house on five acres of land in Jamaica on Long Island, a dozen miles outside of the city. He opened a tavern in Jamaica. But apparently he'd overextended himself; three years later he was forced to sell the house at auction, although he continued business "in his well-known Tavern, where every exertion in his power shall be made to give satisfaction."

He had children. By 1810 he had moved his family back into the city, and in that year he sold off some property that he owned in partnership with others. The following year the family was living in a three-story brick house at 41 Nassau street; they advertised for boarders and operated a coffee house. His son John joined him in business, but apparently things went sour. For reasons unknown they disolved their business partnership in 1815; the elder Battin put the building up for lease and sold off the furniture. This may be the same building that he'd operated as a tavern years before; perhaps he'd never sold it.

It's not clear what happened next, except that Battin remained in the city. He may have opened a stocking shop in the Third Ward that he continued to operate for the rest of his life. And a long life it was. Locals recalled him walking along the Battery at Manhatten's south end every morning before breakfast, maintaining this routine for decades, clinging to his old conservative fashion of knee breeches and stockings. His turning 100 years old was noted in newspapers around the region, which reported that "He attributes his longevity and continued health to his frugal living and avoidance of all luxuries." But he died soon after, on 29 June 1852, having lived for just over 100 years. Besides making the bold move to join the army and sail to America, he had barely ventured beyond the bounds of New York City. But he did do one remarkable thing before he died. In 1845, at the age of 93, he joined a group of surviving veterans of the Revolutionary War. And, responding to a new trend of the times, he had his photograph taken.

The daguerreotype photograph was brought to my attention by its current owner, who gave permission for an image to be published here. This is a rare image of a man who served as a British private soldier in the American Revolution. 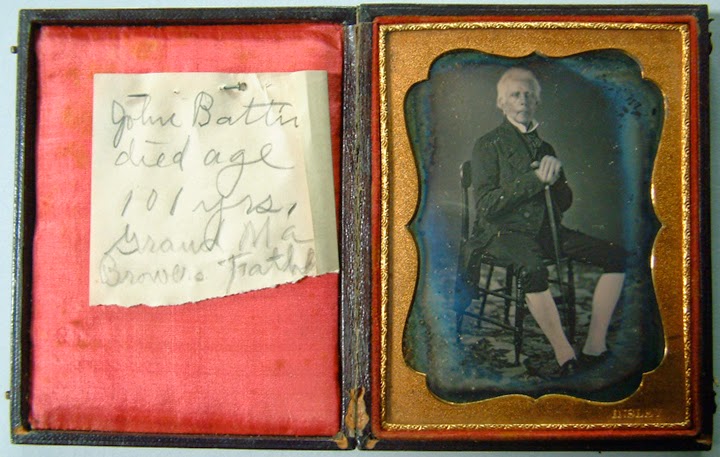 Battin came to the attention of Benson J. Lossing, a 19th-century historian of the American Revolution, who recorded this biography:

Mr. Battin came to America with the British army in 1776, and was engaged in the battles near Brooklyn, at White Plains, and Fort Washington. After the British went into winter quarters in New York, and Cornwallis’s division (to which he was attached), returned from Trenton and Princeton, he took lessons in horsemanship in the Middle Dutch church (now the city post-office), then converted into a circus for a riding-school. He then joined the cavalry regiment of Colonel Birch, in which he held the offices of orderly sergeant and cornet. He was in New York during the "hard winter" of 1779-80, and assisted in dragging British cannons over the frozen bay from Fort George to Staten Island. He was always averse to fighting the Americans, yet, as in duty bound, he was faithful to his king. While Prince William Henry, afterward William the Fourth, was here, he was one of his body-guard. Twice he was sent to England by Sir Henry Clinton with dispatches, and being one of the most active men in the corps, he was frequently employed by the commander-in-chief in important services. With hundreds more, he remained in New York when the British army departed in 1783, resolved to make America his future home. He married soon after the war, and at the time of his death had lived with his wife (now aged eighty-three) sixty-five years. For more than fifty years, he walked every morning upon first the old, and then the new, or present Battery, unmindful of inclement weather. He always enjoyed remarkable health. He continued exercise in the street near his dwelling until within a few days of his death, though with increasing feebleness of step. The gay young men of half a century ago (now gray-haired old men) remember his well-conducted house of refreshment, corner of John and Nassau Streets, where they enjoyed oyster suppers and good liquors. The preceding sketch of his person is from a daguerreotype by Insley, made a few months before his departure.

Much of this information correlates with what we know from muster rolls. "Colonel Birch" was Lt. Col. Samuel Birch of the 17th Light Dragoons. Cannon were dragged across New York harbor during one cold winter, and Prince William visited New York in 1781, probably receiving an escort of dragoons. But Battin never rose above the rank of private, and there's no evidence that he retruned to Great Britain, especially not carrying dispatches. These are the sort of fanciful tales that often creep into family lore. But we cannot deny that this man who ventured to enlist in the British army at the onset of the American Revolution, only to desert and pursue various business ventures, had a life that deserved to be recorded. Having a photographic image of him makes that record all the more remarkable.