When it became clear that all-out war had broken out in America, the British War Office made changes to allow more troops to be sent into the conflict. One change was to augment the size of regiments already in America, or ordered to go there. The number of private soldiers in each of an infantry regiment's ten companies was increased from 38 to 56, the number of serjeants in each company was raised from two to three, and the number of drummers per company increased from one to two.

This change was ordered in June 1775, but it would take time to raise the men. To facilitate recruiting, two "Additional Companies" were also added to each regiment. Nominally these were identical to the ten existing companies, with three officers, three serjeants, three corporals, two drummers and fifty-six private men. In reality, they were administrative structures to make recruiting possible: the officers, with a cadre of non-commissioned officers and drummers, spread out all over Great Britain seeking recruits wherever they might be had. About half of each regiment's needs would be filled by drafts, experienced men transferred from regiments not going overseas, thereby maintaining a reasonable level of overall experience in the deployed regiments. But that still meant that each regiment needed nearly 100 new recruits.

Three officers of the 46th Regiment of Foot worked hard to recruit men in Ireland at the beginning of 1776. The 46th had already gained many new men, both recruits and drafts, prior to embarking for America in late December 1775. Now that their regiment was at sea, Captain Alexander Duff, Lieutenant Samuel Bathurst and Ensign Thomas Digby enlisted 71 new men between 23 December 1775 and 4 February 1776. The results of their work, recorded in a very rare return of British recruits, provides many interesting details on British wartime recruiting. 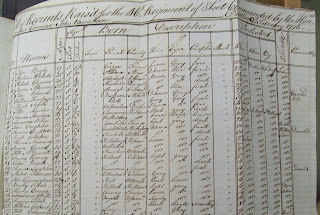 Of the 71 men enlisted, 15 ranged in age from 16 to 20 years old; 26 ranged from 21 to 25; 21 were from 26 to 30, and five were from 31 to 35 years old. No data was recorded for four of the men. This age range mirrors that of broader data sets that include peacetime recruiting: the majority of British soldiers enlisted in their early to mid-twenties. Later in the war, when recruiting got more intensive to keep pace with increased manpower demands, the proportion of younger and older men increased, but the majority continued to be in the same early twenties range.

Thirteen of the men were below the peacetime recommended minimum of five feet six inches, with four standing only five feet four and a half inches tall. It was common for men in their teens, who might still have some growing to do, to be enlisted when below the standard, but only seven of the short men were below the age of twenty; one of the shortest was also one of the oldest, at thirty-two. He was a fifer, which may have influenced the decision to enlist him in spite of his low stature and advanced age.

Eight of the men were enlisted in Dublin by Capt. Duff, and fourty-four by Lt. Bathurst about twenty miles west in Kilcock, County Kildare. The remainder were enlisted farther west by Ens. Digby in Geashill, King's County (today named County Offaly), the ancestral home of the young officer's prominent military family; his influence is apparent in that twelve of his recruits were born in his home town. Almost all of the men came from towns in the midland Irish counties - Dublin (4), Meath (6), Westmeath (9), Offaly (King's) (14), Roscommon (8), and Kildare (11), the remainder being from Donegal (2), Galway (1), Kilkenny (1), Longford (2), Mayo (1), Monaghan (1), Laois (Queen's) (1), Sligo (1), and Tyrone (2). One man came from Middlesex in England, and four have no birthplace recorded.

Only 15 of the 71 had trades (with four unknown), the remainder being laborers. This is well below the overall average of between fifty and sixty percent with trades seen in larger data sets, but reasonably close (although still below) the norm for recruits from Ireland alone. The trades included three cordwainers (who made shoes), two butchers, a barber, breeches maker, dyer, flax dresser, hatter, school master, tailor and weaver. Also listed among the trades was a fiddler and the fifer mentioned above.

Perhaps most interesting of all is that only 37 of these 71 recruits joined the 46th Regiment in America; possibly only 35, given that two of the names don't match perfectly between the list of recruits and the regiment's muster rolls. 14 recruits had deserted by 9 February when the return from which this data comes was prepared (among them the fifer mentioned above); one of those deserters had been caught again and was held in a military prison in Dublin. The remaining twenty men are unaccounted for, having apparently been discharged, transferred, or deserted before the recruits set sail for America. Most of the recruits who joined the regiment in America embarked on transports in early July 1776, and arrived in New York in late October, meaning they'd spent six months in training before sailing; a few arrived a few months later.